Chasing Light on the Streets – Melbourne

Circumstances have meant that for the most part my street photography sessions take place during the day. Why?  Well I have children and so I fit in street photography sessions during school hours on week days and when I can get family to be with my youngest during the weekend.  And that is great for me as I love shooting during the day when there are lots of interesting and well-lit street scenes and equally many people out and about. I have ventured out at night a little more lately as there have been some interesting things going on in Melbourne during the winter. There is always something going on in Melbourne. And being school holidays my youngest has been at sleepovers with family. 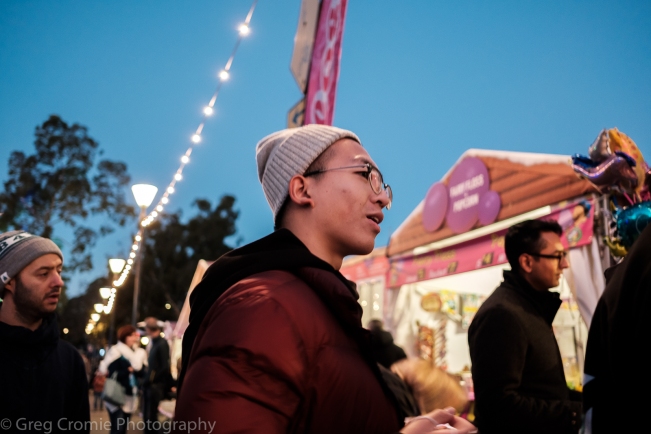 Chasing light, for me, is all about finding the light that exists wherever you may be, to capture an image. Like the human eye, a camera cannot fulfil its purpose without light. Light must hit the sensor inside the camera for an image to be cast. So, be it grey and overcast or the bright, bright midday sun or the ‘golden hour’ of light that exists just after sunrise and again just before sunset. There is enough for the camera to register that light and capture an image.  When the sun is up, or when you are indoors with the assistance of interior lighting, you camera has it easy. Easier again if you have flash lighting or strobes – but street photography isn’t quite as natural if you are blasting flashes at people. They tend to take offence. 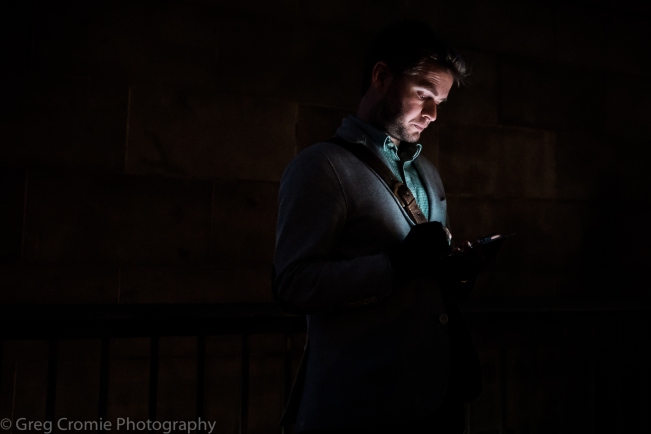 Of course one of the key elements to the ‘science’ of photography is about controlling time.  Being in the right place at the right time can be both luck and a well planned opportunity.  But it goes further than that.  Controlling time also relates to what you choose to do with your shutter speed.  Too fast and your image can be dark as not enough time has passed for enough light to hit the sensor in the camera.  Too slow and any moving subjects in your image will be blurred or the whole image may be blurred just from you moving slightly.

Some photographers, especially in the street scene, create their images with the reliance of blurred subjects.  That level of blurring can be from a slight hand gesture all the way to making the subject look like a ghostly wraith. So they slow their shutter speed down to capture the look they want.  For me though I will almost always choose to have crisp subjects, especially in the foreground of a street scene. I remove any evidence of motion blur by increasing my shutter speed. From 1/250 of a second as a minimum up to 1/4000 if the scene is flooded with light on a bright day.

But try setting a fast shutter speed in a night scene with minimal light and you will get nothing but a black image.  Or raise the shutter speed and open the aperture wide and you get a shallow depth of field.  Maybe not the look you are after but it can be interesting to make the background lights into soft shaped balls of light. Bump up the ISO to compensate for the low light and you get a lot of noise – graininess – on the image. Obviously the science of photography relies on your abilities to manage all of these elements, and much more, to get the right outcome.

In the series of images I have included in this post, you will notice that these images were all taken in dark scenes or full dark at night.  A common element they all have is that I have made the most of the opportunity that positioning and a random source or sources  of light have provided.  Wether it be to illuminate the subject or provide some element of interest in the scene. The light from the subjects own mobile phone, a string of bulbs at a street festival, the light shining up from an LED placed in the walkway or even the candles on my mother’s birthday cake. Not the normal sources of light a photographer may depend upon. But light is light. And again no flash.

One of the last points I want to make is that night or very low light photography does not necessarily need a lens with a wide aperture. I have lenses with an F1.4 and even an F1.2 aperture and yes these lenses give me extra stops of light.  But I don’t use those lenses in my street photography – they serve different purposes.  I use the same lenses I shoot during the day with.  One is a 23mmF2 and the other is the 18.5mmF2.8.  All of these images were shot with one or the other of these two lenses. As I mentioned in my last blog about the ‘rules’ of photography, don’t be told that you can only shoot at night or a dark scene with a wide aperture lens. Try it and see.  Happy shooting!