The previous day had been massive to say the least. Especially the night! You can read about that one here.  It was not a terribly late night but one filled with much merriment and equal portions of Japanese beer. And it would be fair to say that I was feeling a little tired and dusty the next morning.  As per my usual routine, I took breakfast up on the top floor and made the most of eating, or at least trying, as many different bits of the traditional Japanese breakfast as I could manage.  The Japanese egg omelet and the cold salmon were among my favourites.  Whilst on the topic of food, I am planning on writing a blog about eating in Tokyo at a later stage. This will include images of some of my favourite meals and also some advice for fellow travellers to Tokyo. More on that later.

After getting ready for the day, I first walked to Shijuku Station and then took the subway and made my way out to Tokyo Station. Yes another amazing structure – not so much for its above ground scale but more for it being an older building that looks like it would easily sit in a european scene. The older train building has been integrated with modern facilities and of course an immense below ground network. Giving this is the central station for Tokyo it hosts several lines for the JR Rail network as well as hosting other lines for other networks.  Add to this the Shinkansen system and you start to get the idea of just how big this station actually is.  The station sits among many larger department store buildings and is not far from the Tokyo Imperial Palace.  On this occasion I didn’t get a chance to visit the site and having seen the much larger and grander Kyoto Imperial Palace the previous year, I was ok with that.

Aside from that I found the area around the station to be a lot less interesting than other parts of Tokyo.  It is after all predominately a business district.  Also, I was still feeling a little lacklustre after my big night and didn’t feel like exploring much. I am sure there are wonderful parts of that area to find and see but my heart just wasn’t into it.  I did however take a rather long walk through the underground network of tunnels and department stores to find the infamous Character Street.  Not to be confused with the nearby Ramen Street.  Whilst they call it Street, it is actually a section in an underground department store. One is two walkways lines with shops selling all manner of Japanese character products.  The other a very long walkway lined with Ramen shops. Most of which were not fully open at the time of morning I was there.

On my way to this area I got a little disoriented and had to surface to street level to get my bearings and check Google Maps on my iPhone.  Once I found Character Street I had a little wait until the stores all opened. One thing I have noticed about Tokyo is that in their department stores and even on the streets, there are no benches or seats anywhere. My fuzzy brain was irritated about that until I found a cafe and got some decent coffee into me. As per my email home, Character Street has shops dedicated to specific characters from anime, manga and even video games.  I actually didn’t get my camera out for this part of my day.

I found the main shop I was looking for – the Studio Ghibli Store. I got a fair bit of stuff here as I wanted to get each of the kids (that includes me at this point) a large soft toy from their favourite Ghibli film. So two very large Totoro’s, one large Cat Bus and a Gigi. If you have no idea what I am referring to you will just have to watch classics like Totoro and Kiki’s Delivery Service. I bought a bunch of other bits and pieces from this store – A cool Porco Rosso cup for me and a couple of Japanese fans with Ghibli themes on them – just to name a few.  So I left with some very large shopping bags. Making photography all but imposible. That was ok. I had plans for the afternoon.

Hope you are all well.

Yesterday morning I took a train out to Tokyo central station. Wandered around a little bit but it is a fairly business like district. I got very lost in the underground train station and shopping complex. It just stretched for miles and miles with walkways shooting off in every direction. I started to feel the need for daylight and air by the end.

I came across an underground level that is known as Character Street. A whole floor dedicated to the cute, cuddly and incredibly popular animation characters and the like. There was a shop for Snoopy merchandise, one for Pokémon, one for Nintendo characters and of course my favorite – Studio Ghibli. Dozens and dozens of stores all packed with shoppers.

From there I made my way my hotel as I felt the need for a lot less walking. My feet were very sore. So I had some lunch and read my book in the hotel restaurant.

Later in the afternoon it started to rain a lot. I made my way to Shinjuku and walked and took lots of shots of pearly white umbrellas. Had an amazing bowl of Ramen for an early dinner before heading to the Robot Restaurant.

Wow! Insane! Intense! Unbelievable! It was such an amazingly high energy show. Unforgettable. I was lucky enough to get front row seats and sat next to a lady who was visiting her sister who lives here. We talked a lot in between acts and she was half Japanese half Austrian who lived in Germany.

I sent some photos out last night of the show.

It is still raining this morning but thankfully it is a cooler day. 25 degrees. The last few days have been intensely hot and humid. I am off to the Ghibli museum this morning. My own little version of Disneyland. Then this afternoon I am going to head to Shibuya for a visit.

That is about all for now. Love to you all and big kisses to my monkeys. 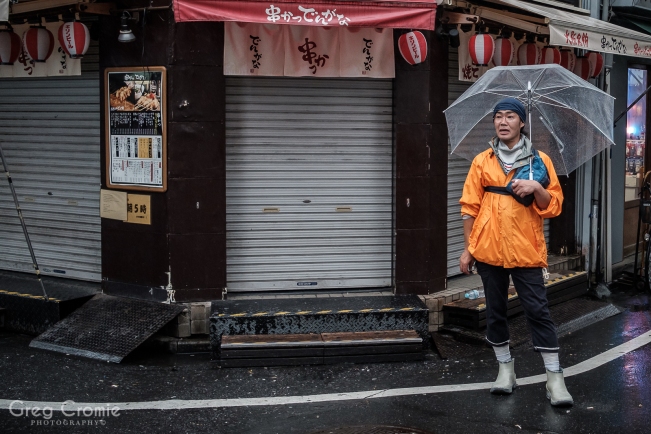 I was feeling pretty tired still and it was quite humid and just not very conducive to recovering from excessive consumption of quality beer. I got myself back to my hotel and actually headed to one of the restaurants within the hotel complex for a nice bowl of Japanese curry and lots of tea. Upon reflection I was glad that I took these opportunities to just relax and not stress about having to fill in every single waking moment with seeing something. It meant that I had the time and energy to enjoy the things I did get to experience. I was often out at night shooting so a little rest stop in the day is not such a bad thing. 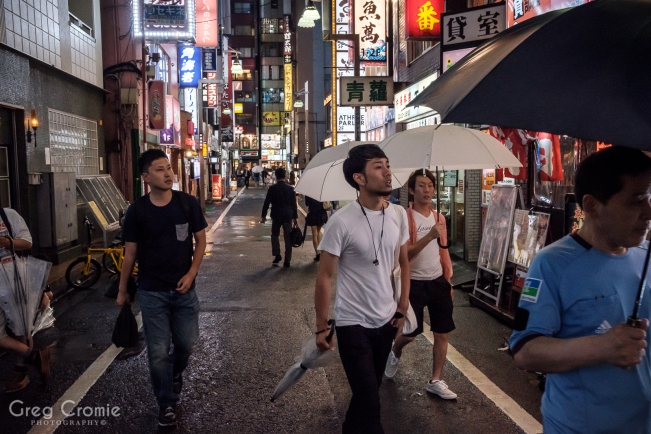 After my lunch I camped out in my room for a bit and sorted through my luggage and also the growing collection of things I had purchased to take home. My suitcase on the way to Japan was only half full. Being full summer I only had shorts and shirts anyway. A purposeful tactic to ensure I had enough space to return home with enough presents for my kids to erase the guilt I felt for going to Tokyo on my own for a week. I think it is a fair trade. I remember on my very first trip to Japan in 2015 I had ended up buying a second suitcase to return home with as I had gone crazy with the gift shopping. This time I was planning to be far more controlled but would still need the space.

I headed out late afternoon to do a little street photography in Shinjuku, especially around East Shinjuku where we had walked through the night before. I got a couple of hours of photography in before it started to rain in earnest.  Seriously pouring. White and clear umbrellas appeared everywhere I looked. I was hanging out in the rain as I had an event to go to that night.  But first, dinner. I found a little Ramen bar and had one of the most incredible serves of Ramen I have ever had. Before long I had to go and make the short journey to the now famous Robot Restaurant in Shinjuku. I plan to post a separate blog about this as I took a lot of photos and wanted to take more time to explain what this crazy, unique and brilliant experience was all about.  So stay tuned for that one. Another day was over on my trip to Tokyo but it had been a great day. Still more to come. Happy shooting.