By this stage in my travels I was struggling a lot with my feet being sore from the get-go. This was beginning to upset me as it was taking the enjoyment out of my experiences. I was finding that by midday I was ready to end the day and just sit in the tub with a beer.  I often gave in to those necessary urges by returning to my room in the middle of the day and then heading out again in the late afternoon. Regardless I was not about to stop what I had come here to do.  I was in Kyoto – the cultural centre of Japan – and was not going to bow out now.

I remember that on this morning I got up super early – once again – before the sun was up.  Yet another pre-dawn visit to the Lawson’s Family store on the corner.  This time I grabbed something a little more substantial to eat as I was going to skip my hotel breakfast today.  A couple of ham sandwiches on the most fluffiest white bread I have ever seen, and an iced coffee.  I know, I know.  Not very traditional. But it was around 5am and traditional was not awake yet. I wanted to get somewhere before the sun was up above the surrounding hills of Kyoto.

With my camera bag packed and ready I set off for the station and the early train to the Kyoto Imperial Palace.  It is located in Central Kyoto so not very far away by subway. I remember stepping up and out of the subway station close to the palace and being consumed by the absolute humidity.  It was incredible that at that time in the morning I was sweating through my shirt within minutes.  My backpack was sticking to my back.  And as the sun rose about the mountains, it only got hotter and hotter. 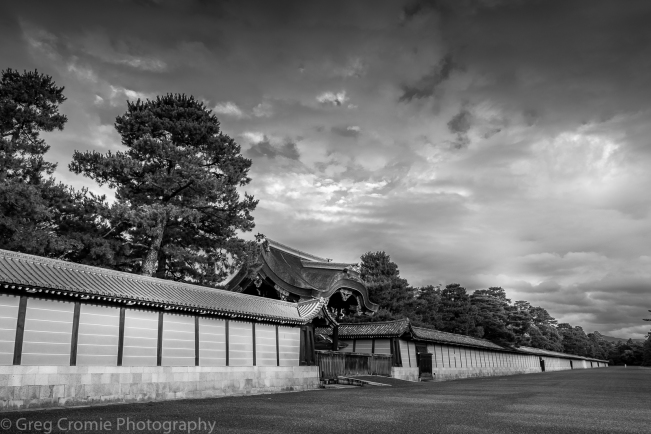 The palace itself was an impressive complex of expansive grounds, gardens, tori (gates), broad walkways and high walls.  My email home to my family goes into more detail about what I personally experienced, but here is a little bit of history. The Kyoto Imperial Palace or Kyoto Gosho was the residence of the Emperor of Japan from the 12th century to the 19th century and is still today considered part of the imperial property.  From the late 1800’s the Emperor’s formal residence moved to the Tokyo Imperial Palace. I intend to visit there when I return to Tokyo in 2017.

Hope you are all well. Very early start today. Took the first train of the morning from Kyoto Station to the Imperial Palace. The palace is located in a giant park with expansive boulevards for walkways and amazing gardens and trees. Probably twice the size of Fawkner Park in Melbourne. The park houses two palaces. One for the imperial family and from what I understand the second is a guest palace! Beats the sofa-bed in the back room sorry mum.

The imperial palace is surrounded by a huge impressive wall of stone and timber and terracotta tiles. Amazingly ornate gates are set into each of the four sides. The sun rose and I managed some great shots. Just beautiful. And because I was there so early there was almost no one around. Just a few joggers – idiots really. And the odd dog walker. I made friends with many dogs and took delight in showing their owners photos of my Yuki-pup. Dogs is a universal language – made me think of your daily ritual to Fawkner Park Janet.

Back on the subway to Kyoto station – one of the biggest buildings I have ever seen. A coffee break – well Iced Matcha Latte – and on the bus.

I went to the Kyoto Railway Museum. Impressive facility with trains ranging from Japan’s first steam trains, then electric trains, the first Bullet Train and the most modern. Full size actual train carriages mostly housed indoors. I am not a train buff but had to admire the engineering that took place with most of the Western World blind to the advances of Japan. Their trains from the 50’s make our most current V-Line trains look outdated. They take so much pride in their train systems. Complex networks of subways, commuters, Shinkansen and even privately owned lines crossing the country. The worlds most efficient network moving 130 million people. I got some cool bits and pieces for Boogie from the gift shop!

Back at my hotel now after a quick stop at an electrics store to get another memory card for my camera. 5,000 photos takes a lot of memory and I still have two and a half days to go!

I have never considered myself to be a train buff or a train spotter.  But something about the opportunity to visit the Kyoto Railway Museum tugged at me since I first saw a poster advertising this attraction since early in my trip.  And having been getting used to the rail network and also having just been on a Shinkansen the day before – I was pretty chuffed. So with no immediate plans for the afternoon I decided that I would make the time to pay a visit. Huge cues of people were already formed outside the museum.  But as with many things in Japan the cue moved effortlessly through the ticketing area and on into the museum.

And I am so glad that I decided to come here.  An impressive slice of Japanese railway history was on display at this huge venue – both inside and out.  Japan’s railway history is quite long and they have obviously taken huge technological and engineering leaps along the way.  I have already raved enough about the complex yet efficient rail service they have.  Moving 130 million people would be tough.

On display were a number of scale models of trains, stations, carriages and even one showing the machines they developed to bore out extensive subway networks around the country.  There was a giant room with a scale model train network complete with tiny scale cars and buildings and bridges and trees.  I remember having a friend as a kid who had a model train set up.  Add to this actual full-scale engines, carriages and the like and I was as excited as a kid in a candy store.  One of my favourites was the front engine carriage of the first bullet train.  It was a fun low maintenance way to spend the afternoon and for a while it took my mind off my sore feet. I went a bit silly in the gift shop and bought my little boy some amazing train related toys and souvenirs.  And a couple for me too of course.  Happy shooting.